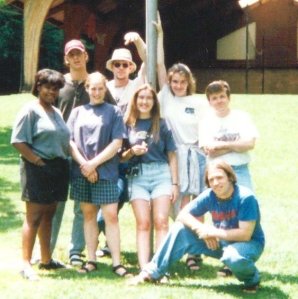 In the fall of 1995, a revival of sorts washed over the campus of the small Christian college I attended in central Kansas. It consisted mostly in late night assemblies at “The Clock” in the central courtyard where an earringed, shaven-headed leader led earnest and penitent seekers in praise songs and intercessory prayer.

One night we had a guest speaker. She was the older sister of a student who was herself studying at Moody Bible Institute in Chicago. This fact gave her instant credibility. She instructed us from her personal experience that “Revival,” if it is to happen (as we all badly wished it would), “Begins with repentance.”

So we repented. We repented of our impure thoughts, our laziness in devotion, the crushing weight of our sin that we were sure was damming up the Holy Spirit. After a couple of weeks, the enthusiasm faded and the gatherings ceased. The awakening we envisioned never materialized. Or did it?

In the final chapter of Christianity After Religion: The End of The Church And The Birth of A New Spiritual Awakening, Diana Butler-Bass suggests that the kind of awakening my friends and I longed for doesn’t just happen. Rather, awakenings are performed as people commit themselves to a set of practices that enliven and demonstrate new spiritual realities. She writes:

Performance has always been important to awakening. In the First Great Awakening, George Whitefield’s preaching was the ultimate colonial theater. In the Second, the camp meetings were theaters of improvisation, where the converted acted out their encounters with the divine. In the Third, both Pentecostals and progressives displayed the public possibilities of racial integration, women’s leadership, and caring for the poor and outcast in the theaters of pulpit and political gathering. American religious history is marked by theatricality, and religious leaders display the faith as much as teach it.

Butler-Bass suspects that preparation, practice, play, and participation are the constituent parts of all of the awakenings that have shaped American faith, including the one she’s describing now. Preparation as people look closely at their faith’s story afresh; practice as people take on new habits of devotion and service; play as people experiment with boundaries and new norms; and participation as people take over the script and push awakening in the direction they need it to go.

This list makes me wonder if an awakening wasn’t happening among us on that campus enveloped by wheat fields at the end of the last century, and if it hasn’t continued unabated in the lives of its crestfallen participants. We encountered in those weeks a certain disappointment as the piety we’d been reared in proved incapable of bringing about the personal and communal transformation we yearned for. But the longer view of our years of learning together suggest to me that the awakening Butler-Bass sees today was stirring in us even then.

One of us is writing today about The Open Source Church. Another is training at-risk youth in Los Angeles to run marathons. Several others are social workers. Though we didn’t know it, perhaps we were performing awakening even then and sowing seeds that are sprouting today in the most unexpected ways. May it continue to be so.

Previous posts on Christianity After Religion

The End of The Beginning